The topic of net neutrality is one of the hottest debated issues of the modern day, and for good reason. We all use the internet and thus have a natural tendency to weigh in on issues regarding its regulation.

The internet, however, is a complex hierarchical structure riddled with reams of vagaries. Without first understanding them, people shouldn’t attempt to propose legislation.

Unfortunately, from Congressmen to commentators to comedians, this is exactly what we’ve been seeing regarding net neutrality.

The only hot political issue where coverage is comparably poor is that of firearms. In fact, USA Today and Vox.com tweeting out explainers on the civilian AR-15 with a chainsaw and grenade launcher attached to it is the perfect analogy for how net neutrality is covered in the media.

But before getting to net neutrality, there are some key concepts about how the internet works that need explaining.

What is the Internet?

The internet is best described as a “network of networks.” It’s divided into regions that perform different functions. Access to the internet is provided through an Internet Service Provider (ISP). The ISP you’re probably most familiar with is the one you pay directly for your home internet (for example AT&T, Verizon, or Bell Canada). These providers are known as Tier 3 providers. But ISPs do a lot more than simply sell you a home internet plan. There are also Tier 1, and Tier 2 internet service providers.

Here’s a rough sketch of the interconnected web in the United States. 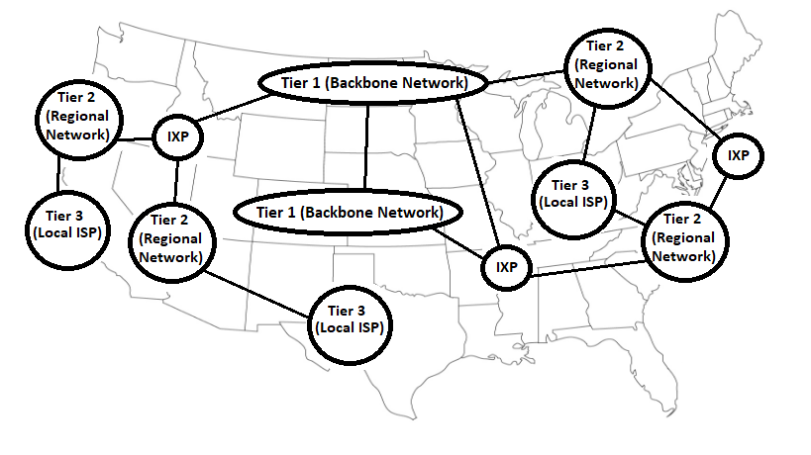 Tier 1 ISPs are known as the backbone of the internet. There exist about a dozen of them around the world, and they peer with one another, thus not having to pay anyone for transit (they have no providers). Tier 1 networks can reach every other network on the internet.

Next on the internet hierarchy are Tier 2 ISPs. These are effectively a bridge between the Tier 1 internet backbone, and the Tier 3 access ISPs end users use to connect to the internet.

And finally, between all of these, we have Internet Exchange Points (IXPs). This is a large, physical exchange point where data is exchanged between peers.

For a closer look at the function these exchange points serve, here’s a second diagram.

ISP C and ISP E are access-ISPs. Meaning, this is where you — a home user — connect to the global internet. You go to your local ISP and obtain a modem. This is how you gain access to the outside World Wide Web. As mentioned above, AT&T would be an example of ISP A, ISP B or ISP D (transit networks). However, AT&T also offers services as an access ISP (this is simply a different division of the company) and deals with selling customers plans for their home internet (see here.)

Lastly, on this diagram, we have two internet exchange points. Recall in the first diagram, we saw these connected IXP points between networks. (1) The New York International Internet Exchange (NYIIX) and (2) the London Internet Exchange (LIIX). These are two of the many internet exchange points that exist around the world. These physical locations are large hubs where independent networks exchange traffic with one another.

What is Net Neutrality?

Traditionally, if Google wanted access to the global internet to deliver its content to you (an end user) it would go to an ISP, and become its customer. The ISP would in turn provide transit to Google.

As the diagram shows below, Google (as well any smaller enterprises, including start-ups) pays ISP B for service. ISP B then routes traffic to the Internet Exchange Point (IXP) in New York, where it peers with the access-ISP C. Customers of ISP-C (this would be you, sitting at your computer at home) now have access to YouTube, Gmail, and all the other services Google offers. 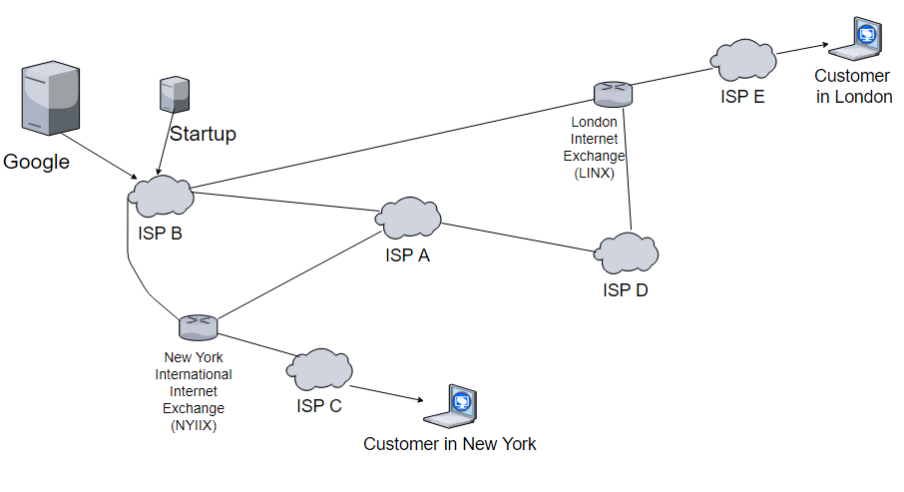 What proponents of net-neutrality argue, is two things. (1) The ISP cannot offer Google a premium service (faster speeds, better reliability, etc.) over any arbitrary smaller company that can’t afford to pay the same prices. All customers must be treated equally. And (2) all traffic through the ISP must be treated the exact same way. This means that if the ISP is transmitting packets for a file transfer for an online storage requirement, it must treat the data packets in that transfer the exact same way that it treats packets from a live video stream. Never mind the fact that video is far more dependent on reliable transmission. The ISP is not allowed to make this distinction and must treat them the same.

The fact is, however, that today Google does not do this. Here is what Google actually does. Google (and other large enterprises that deliver content to end users – think Netflix, Facebook) maintains its own global network infrastructure, and peers directly with ISPs at internet exchange points. Google explains this in more detail on their own website. 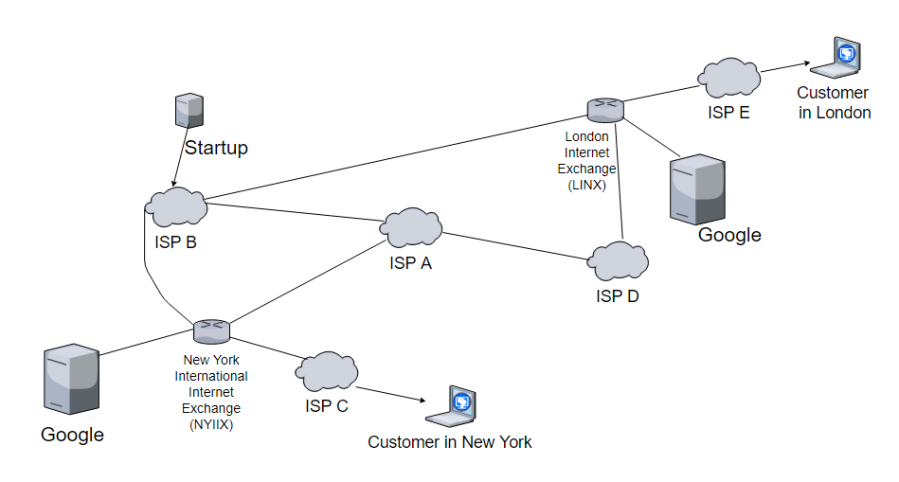 As you can see in this diagram, Google is connected to the New York International Exchange (NYIIX) and the London Internet Exchange (LINX). If you go to the websites of either one of these internet exchange points (New York, London) you can see their full list of members.

What does this mean?

This means that Google is not a customer of an ISP. Google simply connects to these internet exchange points, and here it peers with service providers.

This way, Google has far more control over how its content is delivered to users. If Google wants to treat YouTube video packets differently than the packets transferred for uploading Google Docs files, it can.

Net Neutrality laws will not affect Google because Google does not pay transit providers to deliver content to users. It peers with them.

So why does Google itself support Net Neutrality?

Google is a huge proponent of Net Neutrality. Their website is outfitted with an uppity “We Stand Together. Support a #FreeAndOpen Internet” slogan.

However, Google is privy to the fact that smaller companies, competitors, and start-ups bereft of the resources and capital available to build a global network infrastructure and peer with providers, must instead become customers of higher tier service providers to reach end users.

And what better way to stifle competition in the market, than have these smaller companies subject to a bevy of regulations you’re free of.

Enforcing “net neutrality” does the exact opposite of what its proponents claim. It results in an internet where a handful of large corporations have access to peering agreements with large transit providers (what some people refer to as “the fast lane”), and the rest are subject to far fewer options in terms of services, and even upon growing and gaining market share, will be denied the opportunity to shop around for different ISP plans that suit them best.

Originally Published on The Daily Wire